The Cathedral that Bluetooth Built 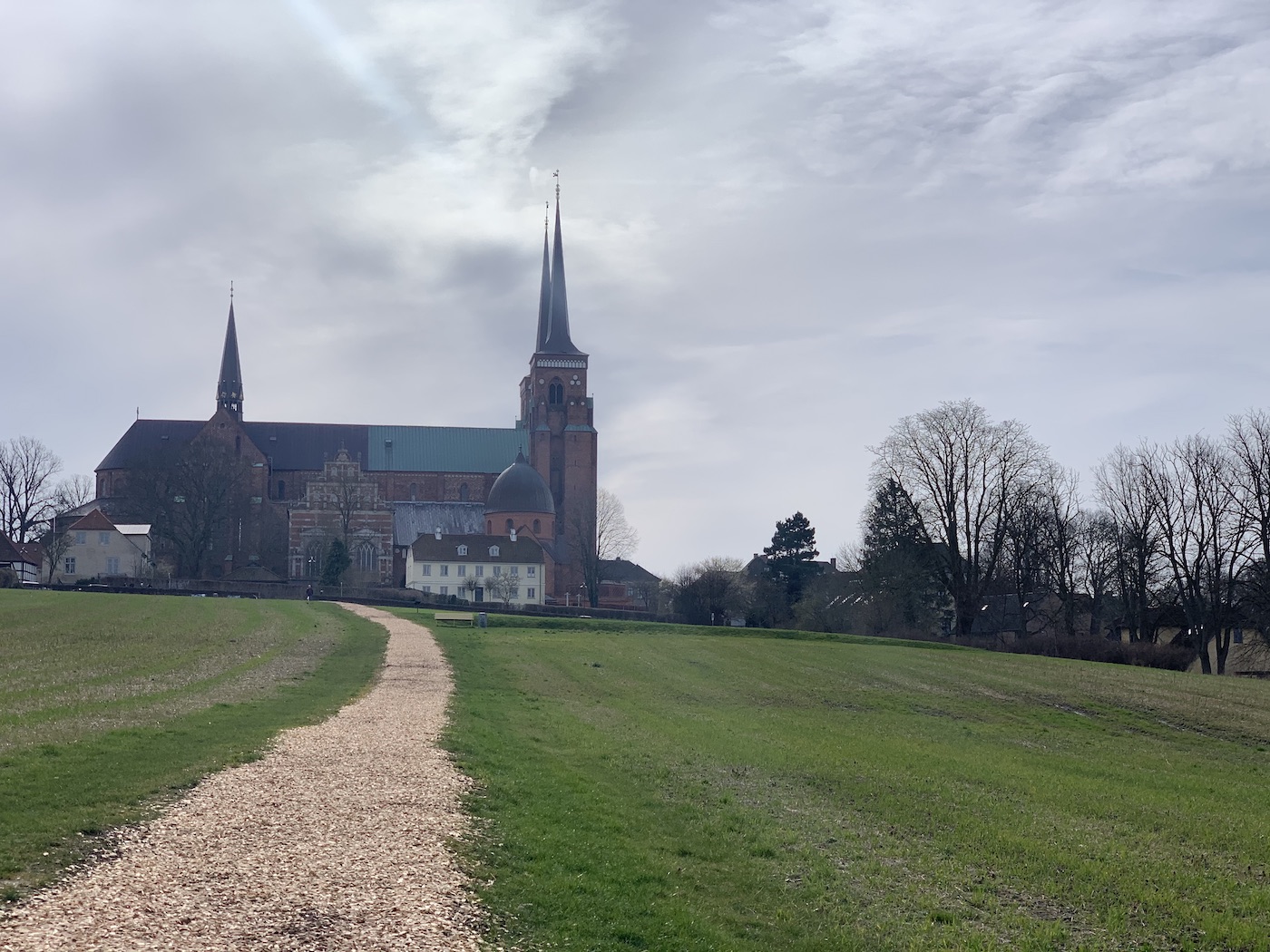 Yesterday, I needed a break from everything. I took a day to sleep in, relax, and basically not leave the hostel. It was one of the better decisions I've made recently. This morning when I woke up I felt completely rejuvenated. Counting what I've done today I'll have ridden 9 trains through 3 countries by this time next week. It'll be hectic but with the rest day I think I'm ready for it. To be honest I'm to the point where I feel a constant desire to just stop, to finally stay in one place and be done. Perhaps it would have been better to make the trip about 2 weeks shorter than what it's become, but that's not something I can change now.

Anyway, today I took a half hour train west to Roskilde, where their cathedral is now the burial place of 22 members of the Danish royal family. Before Denmark became protestant, it was the center of the Roman Catholic church in the area. In the supposed mythical version of my ancestors Lave Newt was the bishop of Roskilde. Despite knowing that that telling of events is false, I still enjoyed the experience of seeing some of the lore of my family in person.

The cathedral is a beauty. In contrast to every other church of its scale that I've seen in Europe the Cathedral of Roskilde is made of red bricks, though it also has Gothic elements in its arches and spires. I imagine the fact that it was under construction for a hundred years had something to do with the mix of architectural styles, but it was still awe inspiring to behold. I found it hard to photograph in it's entirety and retain its beauty, I'll leave the reader to judge from the picture above.

From the signage outside I learned that the cathedral is only open to the public between 1 and 2 in the afternoon, when I first visited it it was only 11 in the morning. Accordingly, I wandered around the mostly closed-for-sunday city to burn up a few hours until opening. I found wonderful little streets and parks to spend some time in. Then, I strolled down to the ocean and walked along the shore until I came across a viking ship museum and workshop.

I've seen ancient viking ships before in Norway and Sweden but I hadn't seen an active workshop like the one that I came across in Roskilde. They build full-scale replicas of discovered vessels and attempt to sail them. They had an exhibit on a test trip performed in 2007 on a vessel built from scratch between 2000 and 2004 that went from Roskilde around Great Britain and back. The photos looked so odd with the viking ship in the foreground and modern europe in the background.

After wandering the outdoor exhibits of the workshop for some time I started to get hungry. I found my way back to what seemed to be the main commercial district and found a place that billed itself as "an American experience." My amusement got the better of me when I saw what they meant through the windows so I sat down inside. The walls were coated with the most amazing fusion of every aspect of American culture—banjos, whips, spurred boots, and cacti next to Elvis memorabilia, hollywood trinkets, and miniature surfboards and other themes going all around the room. A cabinet in the center of the main eating area sported old coca-cola and pepsi bottles in one section while another had models of NASA spacecraft and still another had political bobble-heads.

I spent the entire meal being completely overwhelmed by the amount of work it must have taken to create the restaurant. While learning about other cultures is the main reason I enjoy international travel, I think another important reason is to see how other cultures see my own. This restaurant was the most concentrated dose of Americana I've gotten in 3 weeks. It's interesting to see how some things that Americans consider inconsequential about our own culture other cultures perceive as quintessential. Another thing, over the past few weeks I've adjusted my speaking patterns to make sure I enunciate words clearly, use common vocabulary, avoid slang, and make use of clear hand motions to ease communication with non-native English speakers. I felt myself reverting back to my normal American and at times had to repeat what I was saying to the waiter after I got a confused look.

After that experience, I went back down to the Cathedral and paid the entry fee. The interior was even better than what I was expecting. There were more people wandering around than I was expecting but since the church is only open for a single hour it makes more sense since everyone is so concentrated. The ornate chapels and naves made for quite the final resting places for the royalty of Denmark. I found it surprising that each casket (or pair of caskets for couples buried together) had its own unique design and flourish. Some were molded purely out of granite or marble, others seemed to be coated in velvet or linen tapestries, still others flanged with gold. The individual tastes of the monarchs continue to express themselves down through history to today in the design of their caskets and chapels.

The appointed hour of visitation ended too quickly and I missed out on the last few caskets and the small history museum contained within the depths of the complex. Oh well, I'm glad for the time I got. When I reemerged onto the streets the weather had turned from a peaceful mildly overcast grey to an aggressive wind and the dark threat of rain. I briefly sat on a bench to consider what to do and when I did I felt the exhaustion in my legs. That made it easy to decide to call it a day and catch the next train back to Copenhagen. Despite the fake origin to my coming to Roskilde today, I really enjoyed it. It bore the most similarity to my day in Berkeley in the United Kingdom and thinking about that has made me realize how long I've been traveling even though Berkeley feels like yesterday.

It's odd that I've been thinking that I'm basically at the end of the trip when there are still 15 days left until my plane to Texas. Tomorrow I'll be off to Berlin just for the night then the next day I'll be off to Prague!